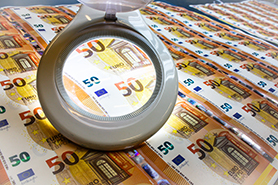 Euro banknotes are produced using sophisticated printing technology. They also have a number of prominent security features, which make them easy to distinguish from counterfeits (without using special equipment) and which deter counterfeiters.

What should I do if I suspect a banknote is fake?

If you are handed a banknote and you think it’s fake after using the FEEL, LOOK and TILT method, then it probably is fake and you shouldn’t accept it. If you think you already have a counterfeit banknote, you should immediately inform the police or the relevant national authorities.

It is a criminal offence to pass on a banknote which you believe or know is a counterfeit. Fake banknotes are completely worthless, you will receive no compensation for accepting a fake banknote.

To double-check the banknote, you can also take it to your nearest bank. All banks have special cash handling equipment which can detect fake notes. Try to remember who gave you the banknote and where. This information can be invaluable in helping to track down counterfeiters.

If you handle large quantities of money every day, you could come across a suspect banknote. Ideally, your employer should have drawn up a plan for such an eventuality. Here are some tips if you are uncertain about a note.

Contact your national central bank if you need more information.

The ECB closely monitors advances in printing and reproduction technologies, and records the number of counterfeits seized. They are analysed by the central banks of the euro area and by the ECB’s Counterfeit Analysis Centre, which collects and processes technical and statistical information on counterfeits. It shares this information with national police forces and other bodies involved in combating counterfeiting. The ECB also works closely with Europol (the European Police Office), which has been designated as the central office for coordinating the protection of the euro, as well as with Interpol (the International Criminal Police Organization) and the European Commission.

Counterfeiters are making increasing use of digital imaging hardware and software. In response, the Central Bank Counterfeit Deterrence Group – an international group of more than 30 central banks which was set up in Basel at the request of the G10 central bank governors – has developed a counterfeit deterrence system (CDS) which prevents the capture or reproduction of images of protected banknotes. The system has been voluntarily adopted by hardware and software producers. High-resolution images of banknotes are however available from the ECB for legitimate purposes.

If you wish to reproduce high-resolution images, please write to info@ecb.europa.eu and explain why you need them.