Dinner address by Peter Praet, Member of the Executive Board of the ECB, at the BNYM 20th anniversary, Brussels, 15 September 2016

The focus of my talk this evening is TARGET balances – a relatively arcane topic that has been the subject of intense debate in the past.[2] During the financial and sovereign debt crisis, TARGET balances rose sharply within the euro area linked to rising fragmentation and market stress. And today those balances are trending upwards again. But as I will explain, the current increases should be interpreted differently from those earlier episodes: they are largely a direct result of the asset purchase programme and do not signal renewed stress in financial markets.

As monetary policy has evolved during the crisis in an effort to ensure price stability and an effective transmission of the policy stance, so too have TARGET balances. The crisis, and the corresponding development of TARGET balances, can be broadly divided into three phases.[4]

In the first phase which followed the Lehman collapse, heightened uncertainty about counterparty credit risk triggered a seizing up of money markets that spread across borders. The Eurosystem responded to banks’ funding needs by introducing fixed-rate full-allotment tenders and extending the maturities of longer-term refinancing operations. In this environment, there was an over-proportional provision of central bank liquidity in jurisdictions where funding needs were more acute. In essence, collateralised liquidity provision by national central banks substituted for private sources of funding that had dried up. Accordingly, the total TARGET balance increased from EUR 100 billion in mid-2007 to around EUR 400 billion by end-2008, around which it fluctuated until the middle of 2011 [Figure 1].

The crisis progressed into its second phase with the emergence of the sovereign debt crisis in 2010-12. This led to a renewed intensification of bank funding pressures, but in a much more country-specific way than before. As redenomination risk surfaced, entire national banking systems lost access to wholesale funding markets. Liquidity outflows accelerated from countries perceived as more vulnerable, like Spain, to those perceived as more stable, such as Germany. This triggered a precipitous increase in the total TARGET balance to a peak of over EUR 1 trillion by mid-2012. In the cases of Spain and Germany, their balances hit record highs in August 2012, when Spain had a liability of around EUR 435 billion and Germany had a claim of around EUR 750 billion. This compares with TARGET claims for both Spain and Germany of around EUR 20 billion and EUR 40 billion, respectively, in August 2007.

The rise in TARGET balances during these first two phases of the crisis can be viewed as a consequence of severe tensions in funding markets where the Eurosystem accommodated banks’ ensuing liquidity needs. Importantly, however, the link between central bank liquidity provision and rising TARGET balances was indirect. When reserves are injected via repurchase operations, as was predominantly the case in this period, TARGET balances are not directly impacted. The national central bank credits the current account of the borrower and records a loan on the asset side of its balance sheet. Only when private creditors withdrew their funding and banks used the funds obtained from the Eurosystem to replace their faltering volumes of private, mainly wholesale borrowings, did cross-border payments emerge, leading to rising TARGET balances. Not surprisingly, TARGET balances came to be viewed as an indicator of euro area financial market fragmentation, and even a stress indicator for EMU itself. A whole literature emerged to understand and explain TARGET balances.[5]

Following the announcement of Outright Monetary Transactions in mid-2012, however, redenomination risk subsided. Banks increasingly repaid central bank credit amid active deleveraging and improved market funding conditions. As such, the Eurosystem’s intermediation role waned and TARGET balances began to decline from late 2012 onwards. But the bank deleveraging process also had another, more pernicious effect: it fed into the renewed macroeconomic downturn in the euro area to produce a vicious circle of contracting credit growth and weak demand dynamics, mirrored by a prolonged downward drift in inflation. This ushered in the third phase of the crisis.

In this phase, monetary policy has evolved in response to very low inflation and the need to keep credit flowing to the real economy. This has resulted in the introduction of new instruments, including the asset purchase programme. March 2015 marked a turning point: before that date the injection of central bank reserves had been primarily demand-driven through temporary lending operations. Since then, the bulk of central bank liquidity provision has been via asset purchases rather than repurchase operations.

The launch of these asset purchases has caused the direction of TARGET balances to reverse. Having fallen to around EUR 600 billion at the end of 2014, the total TARGET balance is now back to levels of around EUR 1 trillion. But though this upward trend in balances, like the previous episode, is linked to the implementation of monetary policy, the link is now direct rather than indirect. Liquidity injection via asset purchases can immediately impact TARGET balances if it entails a cross-border payment by the purchasing central bank. And here lies the crucial difference to the rise in TARGET balances observed until mid-2012: under the asset purchase programme, TARGET balances are directly affected by the way the programme is implemented, which is independent of financial market stress.

Given the integrated structure of European financial markets, in which the sale and settlement of securities is not confined to national borders, direct cross-border liquidity flows are occurring as a result of the asset purchase programme and the ownership and holding structure of the assets that are being purchased. During settlement, which usually takes place with a custodian or central securities depository, the purchasing central bank receives the security and makes a payment in the form of central bank money. And since cross-border flows of central bank money are what impact TARGET balances, the location through which counterparties participates in the TARGET2 payments system largely determines how the asset purchase programme affects the balances.

Counterparties based in the euro area usually connect to TARGET2 using an account held with their national central bank, while non-resident counterparties in countries that do not participate in TARGET2, such as the United Kingdom, may access TARGET2 either directly through a branch in the euro area or indirectly through a correspondent bank. It follows that when a national central bank purchases securities from a non-domestic bank, the purchase is likely to give rise to a cross-border flow of central bank money.[6] As around 80% of Eurosystem purchases by volume have been carried out through non-domestic counterparties, cross-border flows of central bank money are happening on a large scale as a direct result of the asset purchase programme.

Settlement is what ultimately explains the renewed increase in TARGET claims for some countries, like Germany, and in TARGET liabilities for others, like Spain. Under the asset purchase programme, the Eurosystem buys securities from a range of counterparties, including many that are located outside of the euro area and which largely participate in TARGET2 via the Bundesbank, leading to additional inflows of central bank money into Germany as a direct result of the asset purchase programme.[7] So when Banco de España purchases securities from a German counterparty, or from a UK-based counterparty that participates in TARGET2 via Germany, it can give rise to a flow of central bank money from Spain to Germany and affect TARGET balances [Figure 2]. ECB staff estimate that around 60% of purchases by volume under the asset purchase programme have been made from counterparties that participate in TARGET2 via Germany, while only around 5% have been made from counterparties that participate via Spain. It is in this context that Germany’s TARGET claim has increased by around EUR 200 since end-2014 while Spain’s TARGET liability has increased by around EUR 125 billion over the same time period.

At its last meeting, the Governing Council underlined the need to preserve the very substantial amount of monetary support that is necessary in order to secure a return of inflation rates towards levels that are below, but close to, 2%. This translates into two mutually-reinforcing pledges on our policy course looking forward. First, we say that we expect our policy rates to remain at present or lower levels for an extended period of time, and well past the horizon of our net asset purchases. Second, concerning our asset purchases, we have clarified that we intend to maintain the pace at which we are adding in net terms to our portfolio at €80 billion per month until the end of March 2017, or beyond, if necessary, and in any case until the Governing Council sees a sustained adjustment in the path of inflation consistent with its inflation aim. Hence, our measures will continue to underpin the momentum of the euro area economic recovery and ensure supportive financing conditions. Against this backdrop, financial market fragmentation will recede further. At the same time, however, it follows from my exposition that TARGET balances are set to continue increasing alongside the asset purchase programme. The ECB will continue to closely monitor developments in TARGET balances, but at the current juncture at least, the upward trend has little to do with the remaining fragmentation or with financial stress. 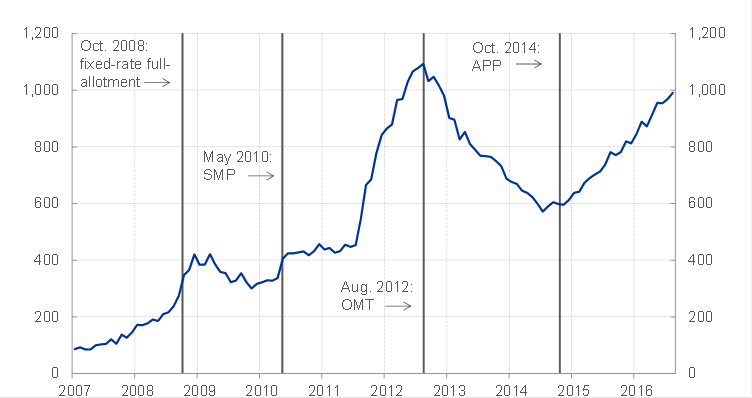 Notes: The chart reflects the sum of all positive TARGET2 balances.

Figure 2: Stylised illustration of how an asset purchase by a national central bank can affect TARGET2 balances

Example 1: The bond is purchased by Banco de España from a domestic counterparty (no cross-border liquidity flow)

Example 2: The bond is purchased by Banco de España from a non-domestic counterparty located in Germany (cross-border liquidity flow from Spain to Germany)

TARGET balances of participating NCBs
Are you happy with this page?
Yes No
What made you unhappy?
Page not working Information not useful Design not attractive Something else
Thank you for letting us know!