Why are we exploring the possibility of a European issuance channel?

Despite the existence of a common currency, the European Union (EU) still lacks a truly domestic capital market. Many market actors only use national structures and solutions, limiting the efficiency with which capital is distributed and transferred across Europe.

The effects of this fragmentation are clearly visible in the area of issuance and initial distribution of debt securities in Europe. Whereas other major currency areas benefit from a single domestic channel, Europe remains largely fragmented across national borders and access to capital is subject to legacy standards, conditions and market practices at national level. As a result, there is no option available in Europe today that enables issuers to reach their European investors in a neutral and standardised way. Instead, issuers and investors rely on a network of interactions between different national central securities depositories (CSDs), or on international CSDs, and on the services, tools and procedures provided by large custodian and dealer banks. In addition to the potential risks and costs associated with a multiplicity of connections and standards, the securities issued always reflect a specific national bias, thus they are not truly “European”. Although this model works well for national issuance, it is sub-optimal when seen from an overarching European perspective. The current structures do not support full financial integration and the Europe-wide risk sharing of a single capital market in Europe.

The following factors, although not in themselves conclusive, are together indicative of the home bias of the debt securities market in the EU:

Within its area of responsibility, the ECB continuously pushes for deeper integration of financial markets in Europe and supports various initiatives in the areas of payments, securities settlement and collateral management. The financial market infrastructures provided by the Eurosystem allow market participants to benefit from both the safety provided by operating in a central bank money settlement environment and the efficiency of pooling their resources for various purposes. Settlement is described as being in “central bank money” if the payment moves directly and irrevocably between accounts on the books of the central bank. Market participants can optimise their liquidity by pooling it and using it for the various services available in TARGET Services. The ultimate objective is to enable European market actors to pool their liquidity safely and efficiently when engaging in payment, securities and collateral transactions within the EU.

In this context, the ECB is exploring the possibility of developing a centralised and standardised service for EU issuers and market infrastructures with the aim of facilitating the issuance and distribution of euro-denominated debt securities in Europe. The objective is to offer the market the opportunity to issue at a European level. Today a debt security is identified and associated with a specific national market (or an international one, issued in commercial bank money). Settlement is described as being in “commercial bank money” if the payment moves between the accounts of non-central banks. It is envisaged that, in the future, debt instruments will be associated with the EU domestic market and settled in central bank money.

Further integration of the securities issuance and distribution process in the EU could improve the conditions for capital financing, make the European securities market more attractive in the global economy and allow an effective redistribution of private risk across EU markets. In addition, if the EU decides to take steps towards the creation of a safe asset, as suggested by the European Systemic Risk Board (ESRB) in 2018, the existence of a single European infrastructure in conjunction with the definition of a common European debt instrument technical standard could greatly support such a development.

The European Distribution of Debt Instruments (EDDI) is an initiative aimed at establishing a European service for the issuance and initial distribution of debt securities in the EU. The service would cover three different areas which are interlinked and complement each other. 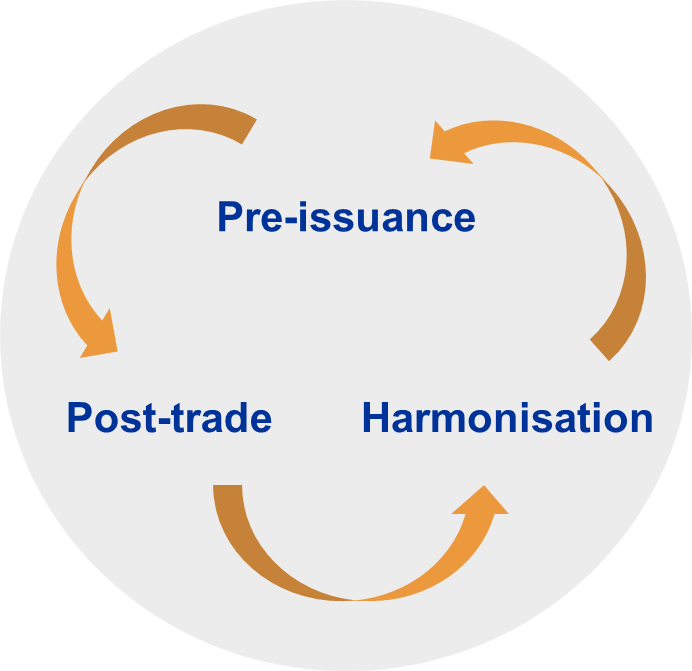 EDDI would provide an integrated end-to-end issuance channel which could allow straight-through-processing (STP) of new European debt instruments from the initial announcement all the way to the final distribution of the securities to the investors, thereby reducing operational costs and risks as well as processing times and manual interventions. Operating within the technical environment of TARGET Services, EDDI would also provide synergies with other market infrastructures provided by the Eurosystem.

EDDI would be fully optional and offered in a modular approach, giving issuers the flexibility to decide whether to use the new service and how to make best use of it. Depending on their funding models and the securities to be issued, issuers may choose to use both the pre-issuance and the post-trade tools, only one of them, or continue issuing via existing channels.

What are the next steps?

The ECB launched a public consultation on 28 may 2019 to seek the views of relevant stakeholders on the EDDI initiative by 9 July 2019. Unlike its previous consultations in the field of market infrastructure and payments, this consultation does not put forward any detailed functional specifications of the service. Instead, stakeholders are involved at an earlier stage in the process. The ECB is inviting issuers, investors, CSDs, custodians, agents, dealers and other interested parties to provide their feedback on the problems and difficulties that need to be resolved in the issuance and initial distribution of debt securities in Europe and to put forward their suggestions. To facilitate the process, a set of questions has been provided to structure the consultation. However, if this format is not convenient, contributions are also welcome in free text format. Furthermore, stakeholders can choose whether their feedback is made public or kept confidential.

The Eurosystem will go through the feedback received with a view to deciding on any follow-up actions in line with its mandate to support the development of a financial market infrastructure service that will enable the harmonised issuance and distribution of euro-denominated debt instruments in the EU, taking into account all relevant legal, regulatory and statutory considerations.