TARGET2: a global hub for processing payments in euro

What is the geographical reach of TARGET2?

We live in a dynamic and interconnected world. Almost every business deals with foreign suppliers, partners or customers. Therefore, it is not surprising that every year financial institutions across the world initiate more and more international payments in all major currencies, either on their own behalf or on behalf of their clients.

The euro has an important role to play in the global flow of money. It is the second most commonly used currency for international payments after the US dollar, according to SWIFT. The smooth flow of euro across borders is supported by TARGET2 – the payment system owned and operated by the Eurosystem. It is used by both central banks and commercial banks to process payments in euro in real time. Besides the Eurosystem’s monetary policy operations, TARGET2 also settles bank-to-bank and commercial transactions. Every five days, TARGET2 processes a value close to the entire euro area GDP.

25 central banks in the European Union, including the ECB, and their respective banking communities are connected to TARGET2. 1,004 financial institutions had an account in TARGET2 in 2015. However, the system’s international network reaches out much further.

In this respect, the analytical team of the ECB’s Directorate General Market Infrastructure and Payments analysed the payments initiated by TARGET2 participants who act as correspondent banks to financial institutions which are not connected to TARGET2, a concept known as “tiering”. The study identified over 55,000 credit institutions directly or indirectly connected to TARGET2 worldwide. 17,300 of them were actually established outside the EU.

Origin of payment and intermediation

Among the non-EU countries settling payment transactions in euro via TARGET2, the United States has the largest share both in terms of value (28.39%) and volume (11.56%). It is followed by Switzerland, China, Canada and Japan (see the table below).

Table: Origin and intermediaries of payments from non-EU countries

Overall, Germany plays the most important role as an intermediary between TARGET2 and the rest of the world. 69.32% of the value and 63.04% of the volume of euro payments originating from non-TARGET2 countries pass through banks that hold a TARGET2 account with the Deutsche Bundesbank. This means that out of every euro processed in TARGET2 on behalf of non-EU banks, almost 70 cents are settled in Germany.

At the same time, strong ties are observed between some European countries and groups of countries located in other geographical areas. This is due to historical and cultural factors, as well as strong business relations between their markets. For instance, Spain plays a key role for financial institutions in the South American countries whereas France is the main intermediary for financial institutions in the West African economies.

The map below shows that TARGET2 connects virtually to any point of the world map – with its strongest links outside Europe being with institutions from North America, Asia and Oceania. In most cases, the financial institutions which act as correspondent banks to TARGET2 are banking groups operating in Europe, but with global reach. Offering clients the possibility to settle payment transactions in euro is a key aspect of their business model. 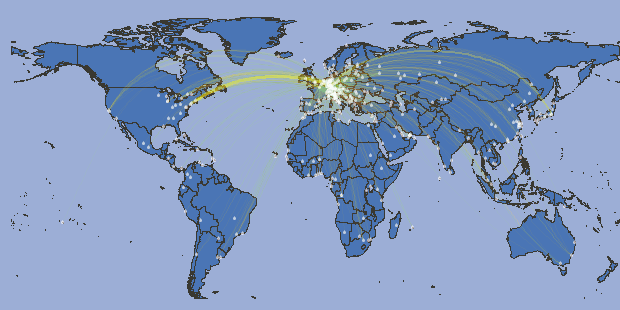 The total value of TARGET2 turnover in 2015 amounted to €469.8 trillion. About 30% of it came from banking groups with headquarters outside the EU. TARGET2 makes indirect access to the euro area payment market possible for almost any institution in the world. This highlights the key role that TARGET2 plays as a global hub for processing payments in euro.

Disclaimer:The data were compiled by members of the TARGET2 Group of Users from the Operational side (GUO), who have access to TARGET2 data in accordance with Article 1 of Decision (EU) 2010/9 of the European Central Bank of 29 July 2010 on access to and use of certain TARGET2 data.

The ECB and the Market Infrastructure Board/Market Infrastructure and Payments Committee (former PSSC) have checked the data to ensure they are compliant with the rules for guaranteeing the confidentiality of transaction-level data pursuant to Article 1(4) of the above-mentioned Decision.