How you benefit from the euro

As our currency, the euro has become an integral part of everyday life and it makes it easier for us to trade, travel, study, live and work abroad. But it’s much more than a convenient way of paying.
more What is the marginal lending facility rate?

The ECB’s marginal lending facility offers overnight loans to banks. The interest rate charged on these loans is one of the three rates the ECB sets every six weeks.
more What is the main refinancing operations rate?

The main refinancing operations rate is the interest rate banks pay when they borrow money from the ECB for one week. It is one of the three interest rates the ECB sets every six weeks.
more Why is cyber resilience important?

Cyberattacks not only pose a threat to individuals or organisations but can also have broader consequences. Find out what the ECB does to promote cyber resilience and why we all need to be alert.
more Bitcoin is often called a virtual currency, but there are several reasons why it is not actually a currency. What are they? And why might you think twice before buying any?
more What is forward guidance?

When the ECB gives forward guidance, we are providing information about our future monetary policy intentions. Why do we do this and how does it affect the economy at large?
more What are structural reforms?

In the wake of the financial crisis, politicians and policymakers have often called for structural reforms to help lift economic growth. But what are structural reforms? And why does the ECB care about them if its mandate is to keep prices stable?
more The new €50 note is out and waiting for you in cash machines. But do you know how the central banks that issue the notes generate income as a result? Find out how seigniorage income works in the euro area.
more What is collateral and why do central banks require it?
more What are non-performing loans (NPLs)?

Loans are considered “non-performing” when more than 90 days have passed without the borrower paying the agreed instalments. Why are bad loans an issue for banks and how does bad debt affect monetary policy?
more What are minimum reserve requirements?

Banks are required to hold a certain amount of funds in their current accounts with the central bank. Why do they have to do this and how does it work?
more TARGET2 is a payment system owned and operated by the Eurosystem. But why is it important and how does it work?
more What is the difference between nominal and real interest rates?

What is the difference between nominal and real interest rates? And why does it matter?
more What is the quiet period?

Governing Council members observe a so-called quiet period before monetary policy meetings. What does this mean in practice?
more What is the deposit facility rate?

The deposit facility rate is one of the three interest rates the ECB sets every six weeks as part of its monetary policy.
more What is a central bank?

Is a central bank just another bank? What is the role of central banks in the economy and what is special about them?
more 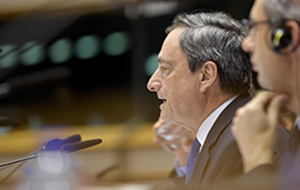 How is the ECB accountable for its actions?

What does accountability mean for the ECB? How do we explain our actions to the public?
more