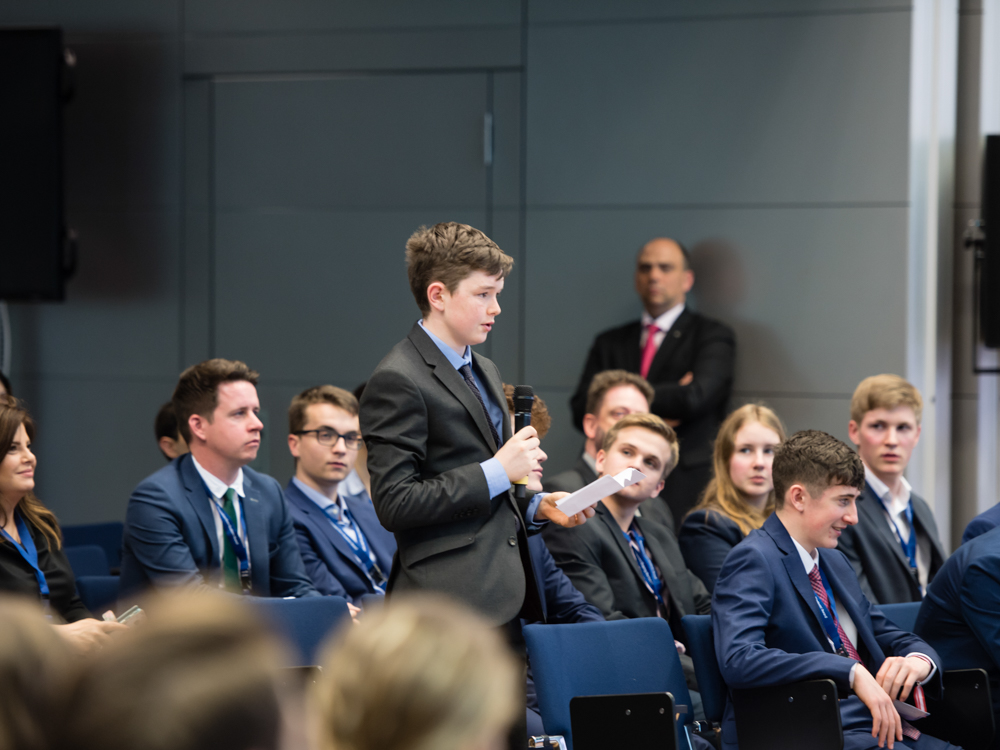 We know that the decisions we take can have an impact on your day-to-day life. That’s why we want to make sure that, instead of just hearing about us and what we do, you also have the chance to talk with us directly.

The ECB Youth Dialogue gives you the chance to do exactly that. We hold events throughout Europe – and also online – that put you in direct contact with ECB policymakers so you can ask any questions you have and share your views with us.


Here is a taster of the discussion…

…on the recovery from the coronavirus pandemic

This is an unprecedented crisis in terms of the origin of the shock and how rapidly the pandemic has caused a decline in GDP around the world. Our measures have helped reduce the impact of the crisis, but GDP levels will take around two years to fully recover.

…on the economic measures implemented during the pandemic

We have to strike a balanced approach between avoiding zombie companies and helping so-called sleeping beauties: companies that are viable but suffering because of the pandemic.

…on climate change and the ECB

Climate change is part of the work of any central bank, because it affects financial stability, the economic outlook, inflation and growth.

…on the ECB strategy review

Monetary policy is not about revolution, it's about evolution. The ECB’s definition of price stability can be modified, but I think what is much more important is the instruments that we are going to use to deliver it.

…on completing the banking union

I think completing the banking union could be key to address certain issues at the European level, such as the low profitability of European banks.

Ask Christine Lagarde at the European Youth Event, online, May 2020

Young Europeans asked President Lagarde their questions on the ECB's response to the coronavirus pandemic emergency in an online youth dialogue. The event was organised together with the European Parliament as part of the European Youth Event 2020 and took place on 27 May 2020.

Participants also sent questions about their concerns for their careers, the future of Europe, digitalisation and climate change. Here are the highlights from the discussion!

...on the economic impact of the coronavirus pandemic

Viruses know no borders, so all of us are affected. However, there will still be different consequences depending on factors such as a country's situation before the pandemic and the nature of its economy. It is our collective duty to make sure that we come out of this in as balanced a way as possible.

...on countries increasing their debt

What we are investing in is what really matters. We should transform our economies and make them more efficient, productive and responsive to people's needs. We should also encourage the use of debt to invest in resisting climate change and stimulate sustainable growth.

...on European institutions working together

EU policymakers have kept in constant contact in this crisis situation in order to compare best practices and deliver a coordinated response to the pandemic. We need to respond collectively. With the right measures, we stand a chance of coming out of this together.

Climate change needs to be addressed collectively. This is not something that can be done in isolation. The ECB belongs to the Network for Greening the Financial System (NGFS), which brings together nearly 50 national central banks and supervisors to explore possible responses to the incredible challenge of climate change.

...on the future of young people

Young Europeans have to prepare themselves for change. We will all train over the course of time, we will acquire new skill sets, new tools. We will transform ourselves and we have to just get ready for that.

More than 5000 students, from ten different countries across the eurozone, participated in the eighth edition of the Generation €uro Students’ Award – a competition that challenges teams of students from eurozone schools to suggest solutions to European monetary policy issues. The ECB invited successful teams to Frankfurt on 8 May 2019 to discover even more about central banking, and to meet former President Draghi for a Q&A session.

Here’s a taster of how Mario Draghi responded to students’ questions!

… on how young people can shape the future of Europe

Europe works if we work together, and for this we need you. We want to hear what you have to say. We need you to get involved in debates and speak up for what you believe in. One way to do this is by taking part in the European elections. With your vote you can shape the future of Europe.

… on central banks communicating to the public

Central banks nowadays make a constant effort to be transparent and to explain their work to the general public. We have a continuous flow of information through press conferences, press statements, speeches, and youth dialogues.

… on completing the economic and monetary union

Our monetary union is not yet optimal, nor is it complete. Sharing a single currency requires deeper integration in the European Union.

… on support for the euro

Support for the euro is at a historical high of 75% of eurozone citizens. But research published by the Banque de France shows that people are convinced the euro has done more for other countries than for their own. This is probably due to the unprecedented crisis we have experienced. As the memory of the crisis fades away, we hope that this uneasiness will also disappear.

In 2012, lots of people were thinking that the euro was dead. And then there was a European Council meeting which created the banking union. Markets were so discouraged at the time that they underestimated its importance. But it was a big change, it produced important results, and what this Council meeting showed is the political commitment of our leaders to the euro.

Watch the Q&A between President Draghi and the successful teams from the Generation €uro Students’ Award by following the links below.

Have a look at the photos of the event

The ECB held its sixth Youth Dialogue in partnership with Bocconi University and Debating Europe – an online platform where young people can discuss current issues with Europe’s leaders. On 13 March 2019, ECB Executive Board member Benoît Cœuré met with students to discuss the challenges faced by young Europeans today. Ahead of the event, we asked you to send in your questions for Benoît Cœuré via Twitter or by commenting on the Debating Europe platform. We added a selection of these questions to the live debate.

Here’s a taster of the discussion!

...on the importance of education

We need to redirect public spending towards education in Europe. Young students should receive the education they need to successfully compete in the global digital labour market.

...on innovation and digitalisation

We must strengthen Europe’s capacity to innovate. Public and private investment should support digitalisation in leading industries, and capital market union can play a pivotal role in allocating capital where it is most needed.

...on the role of young Europeans

You are the ones who will chart the path that decides where the currents of history will take Europe next.

...on the Italian economy

Italy’s economic situation is not a threat to the eurozone. Italy’s main challenge is to increase productivity in the longer term.

Gender inequality is a limit to growth. If more women work and get equal pay, that would raise the standard of living in Europe.

...on cash in a digital age

Cash is an essential part of trust in currency. Means of payment have to be driven by social demand. We are studying digital currencies, but we still see strong demand for cash in the eurozone.

Watch the exchange of questions and answers on these and other topics between Benoît Cœuré and students of Bocconi University.

From 17 to 23 January 2018, we asked you to send questions for President Draghi, via Twitter and Facebook, on any of the following topics:

Watch the answers President Draghi gave to some of the questions received and have a look at the debate on our social media channels!

The European economy has been continuously expanding for several years now and employment is higher than ever, but we have to continue improving and make sure everyone benefits.

When will Europe fully recover from its recession?
Ismail, Italy

Imagine artificial intelligence and robots cause massive (youth) unemployment. How will the ECB react?

Blockchain is an innovative technology that could improve efficiency. We are assessing whether it could be used in our own services in the future. Concerning bitcoin and whether you should trust it, President Draghi advises caution, as it is not backed by any central bank or government, adding that it is not the ECB’s job to regulate it.

How can we harness blockchain technology to support the economy?

If you were a young university student like me, would you buy some bitcoin and keep it for safety?

The last crisis was severe, but the worst of it is behind us. European countries entered the crisis with major weaknesses and were not able to react adequately. Today, significant progress has been made in many areas, making us better equipped for the future.

Do you think the EU and ECB will be able to reform enough to be able to cope with yet another big economic crisis, before the next crisis happens?

Do you want to know more about the topics of this ECB Youth Dialogue? Take a look at the following pages! 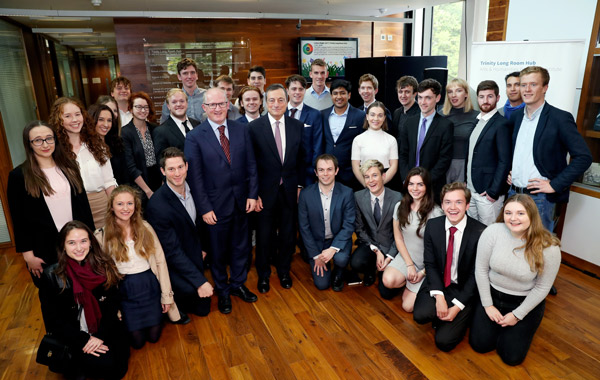 The event was organised in partnership with the Central Bank of Ireland and Trinity College Dublin.

Will blockchain have a role in the future? Is the potential for house price bubbles a growing concern for the Governing Council? To what extent is forward guidance and clear communication seen as a key component of modern central banks?

Watch the exchange of questions and answers on these and other topics between President Draghi and economics students from Trinity College Dublin.

Explore the discussion about the meaning of innovation and productivity for young people.